You are here: Home / Oot & Aboot / Sleigh and Cutter Rally

Every year in Minnesota, if there’s snow, you can count on there being at least one Sleigh & Cutter Rally in the area. This year there were two that I was made aware of. The first was on January 29th on the Eagle Valley Golf Course in Woodbury, MN. The second was a week later (Feb 4th) on the Washington County Fairgrounds in Lake Elmo, MN. I didn’t attend the second due to lack of snow and too many other possible photographic activities that weekend, but I did make it to the first.

Before going to an event like this, one needs to consider the weather conditions, and exactly what you plan on doing to obtain your photos. As it was in the low 30’s with a mild wind, I knew to dress warmly – especially my feet as I’d be doing a lot of standing around. I also knew I’d be getting some shots that were low(er) to the ground, which meant lying or kneeling in several inches of snow. Unfortunately, I forgot to bring the bath mat I usually use in such situations. An old rubber-backed bath mat is excellent for keeping you off of damp (or snowy) ground that will cause you to be uncomfortable while shooting and dirty/wet when you move to your next location.

I arrived on the site before the main “parade” began and had time to check in with the organizers, other photographers, spectators and horse owners. I also made use of this time to get some intimate portrait shots of the horses before and while they were harnessed up to the sleighs and cutters. 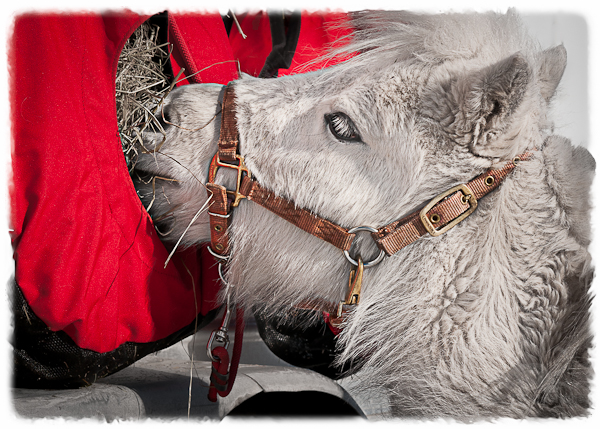 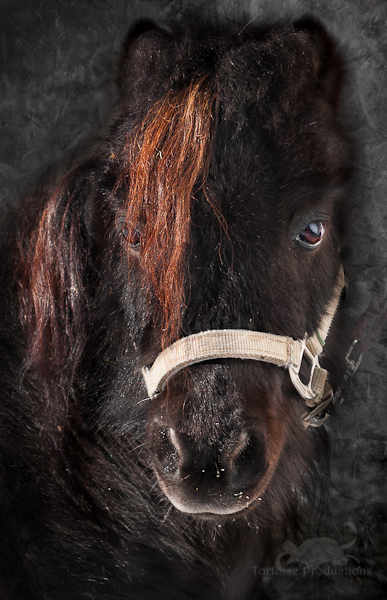 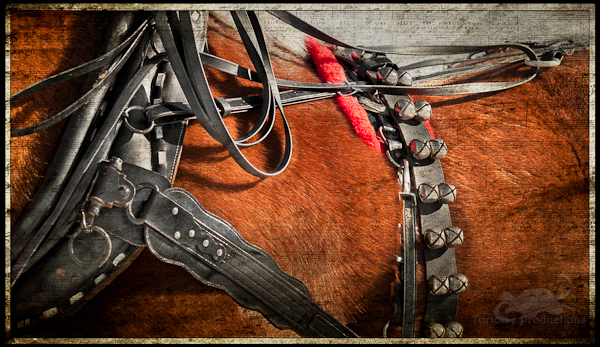 Next, I moved out onto the golf course to find that “perfect” spot. As it turne 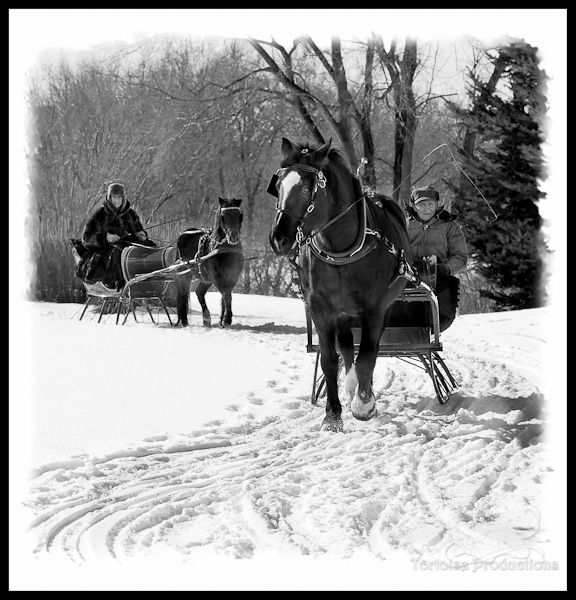 d out, the perfect spot was right next to where the judging would take place. So I set my white balance, settled in and waited for the first sleigh to go by.

One thing to remember when photographing horses – in any capacity, whether they are harnessed or not – is that they can be unpredictable animals. I was forcibly reminded of this this day. As I was photographing the teams going by, a horse pulling a cutter decided that he wanted to take a “shortcut” from the curve I was standing on, to the other side of the course. And I was (kinda) in the way. All I know is that suddenly the horse I was busily photographing was getting bigger and not turning the way I was anticipating. While taking one LARGE step backwards I dropped my camera from my eye and witnessed a cutter with a very concerned driver passing less than a foot away from me. (I’d show the photo taken just before I lowered my camera, but it’s rather out-of-focus) This was the point at which I decided that perhaps this was a good time to change my position on the course.

I moved away from the judging area towards another curve and settled in on a relatively snow-free patch to photograph the rest of the teams. 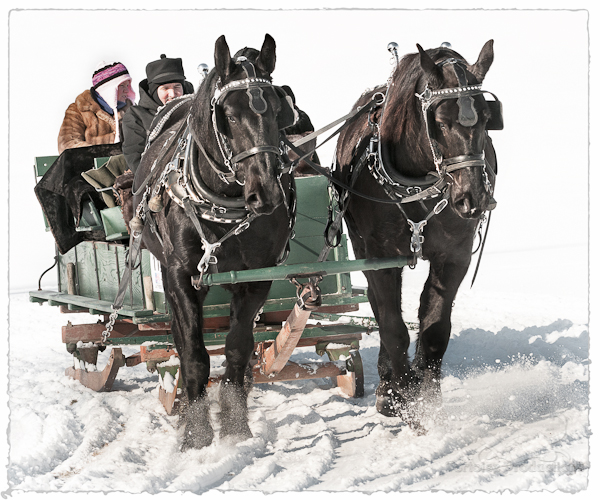 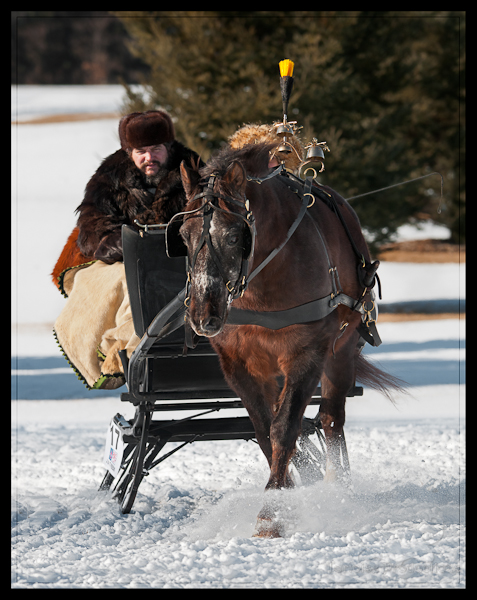 The location turned out to be great as, in addition to having a curve, there was also an area where the teams paused before going before the judges. This allowed for some different shots. 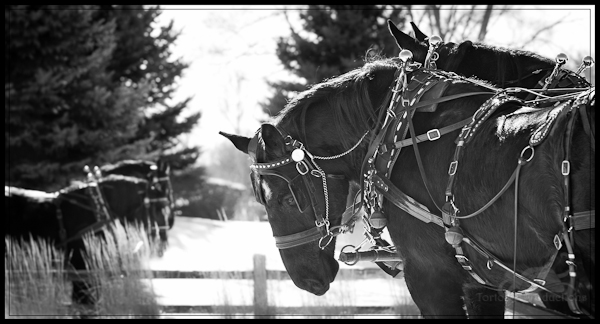 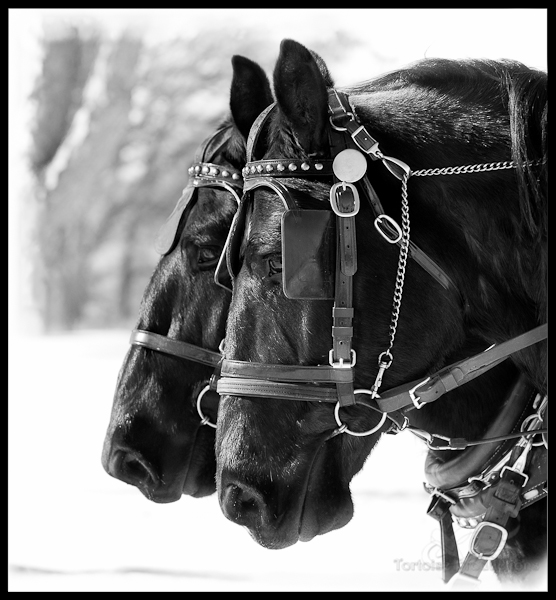 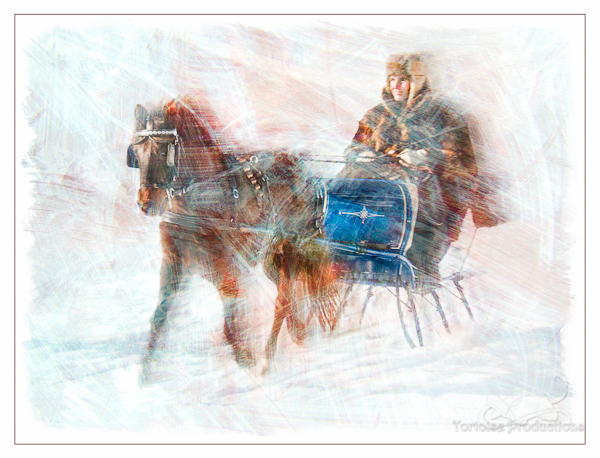 There’s not much I enjoy more than photographing animals in motion, and this day proved very much worth any discomfort I had (cold toes!).

I hope to get out to more Sleigh & Cutter Rallys next year – but for this year, I think I’ve had enough of snow and cold.

Bring on the warmth of summer!